We at the Inn on Crescent Lake, thoroughly enjoyed planning and hosting an English-style tea for our local women’s book club- and because the book of discussion was A Christmas Carol by Charles Dickens, the evening was deemed “A Dicken’s Tea”.

Review of the Novel

Most memorable novels transport readers into settings that include aspects of the natural world with vivid descriptions of the weather and the environment. A Christmas Carol, on the other hand, although there were details about the cold, gray weather and Ebenezer Scrooge’s chilly, dark and dismal home; the setting was very urban Victorian with almost no descriptions of the natural world. However, foods of all kinds: fruits, oysters, sausages, chestnuts, cakes, mince pies, tea, punch, and of course the massive Christmas table spread with a goose and all the fixings and of course, the quintessential English luscious plum pudding- all were described with great detail and enthusiasm. So much so, that these festive foods became characters themselves! In fact, literary historians label Dickens as a real foodie and modern-day readers can imagine him as a taste-testing critic on Holiday Recipe Championship, Top Chef or The Great British Baking Show alongside Dame Mary Berry and baker, Paul Hollywood.

Perhaps Charles Dickens pre-occupation with food stemmed from growing up poor and hungry as a child. His father went to prison for not paying debts and 12-year old Charles was forced to work in a dirty, dark and crowded factory just to have a little money to buy bread. This personal history may explain why foods play such an important role in his novels and why Dickens created many poor, hungry, innocent children as the main characters. He desired to relay to readers that access to good, nourishing foods was a human right no matter one’s class or status.

Dickens was masterful in relaying the joy and charm in food traditions and in describing the foods/beverages of that time period-especially indulgent, festive ones. In fact, Dickens descriptions of the holiday meal table spread are still what we see in many countries today.

Coming up with a Dickens-style menu proved to be a simple task since he included so many ideas for dishes in A Christmas Carol. Here’s the menu we came up with!

Cottage Pie– we sautéed ground beef, onions, carrots and green beans together in an extra large saute pan. The filling was spooned about a third of the way up the inside of a ramekin and then mashed potatoes that were made the day before were added on top. Grated cheese was sprinkled over the potatoes and this delicious comfort food was baked at 350 degrees for about 30 minutes.

Mini Vegetarian Mince Pies– we took liberties with a recipe for mincemeat and one for plum pudding and used ingredients from both to come up with this pie. Dried fruits, frozen cherries, citrus zest, toasted nuts, eggs, sugar, spices and a splash of whiskey and brandy! We soaked the dried fruit in some apple juice mixed with the liquor to soften & plump them up. Delicious!

Twelfth Night Cake Truffles– we made a butter cake with dried cranberries and orange zest the night before and crumbled and then mixed it with a large spoonful of buttercream frosting and refrigerated the mixture in a bag overnight. The day of the tea we rolled the mixture into 1-inch balls and then dipped them in melted white almond bark and topped with sprinkles. A Union Jack flag toothpick went in each.

Soul Cakes-we used a traditional recipe and these came out very much like a combination of shortbread and scones. Raisins were used to make a “cross” on the top of each. ‘Soul-caking,’ we learned is thought to have started in the 10th century and was the pre-cursor for what we know in modern day as ‘trick-or-treating.’ Poor English citizens, mostly children, would go into more well-to-do neighborhoods, dressed in disguise, singing traditional songs, carrying lanterns made with turnips and then would beg for these cakes and for prayers for the souls of the dead. Charming, yes, Creepy, also yes.

The star of the show that night was: The Smoking Bishop (wassail punch/mulled cider/mulled wine). Every year our family makes wassail with juices and mulling spices for the holidays and we’ve been making it at the Inn for several years now for guests to enjoy. It’s been a hit for a long time for sure. When we read the last page of A Christmas Carol and read Scrooge’s exclamation regarding a discussion of business affairs with Bob Cratchit over a Christmas bowl of Smoking Bishop-we had to solve the mystery of what the drink was exactly?! We dug into it and discovered that this punch was popular at Christmas time in Victorian England and was named Smoking Bishop for the smoky vapors that rise from the pot when heated very slowly and for the color of the liquid which resembles a bishop’s robe along with the type of punch bowl it was served in which is similar to a bishop’s miter.

The original recipe requires the roasting of a Seville orange with cloves inserted in the rind; however, we did more of an Americanized, less alcoholic version and combined in a crockpot:

Put all in a coffee filter and tie with wire and attach to handle of crockpot. The spices need to “mull” in the warm liquid for half a day or so to get full flavor. If there is any leftover be sure to take the spice sachet out before storing in fridge as spices get more potent with time.

A Fun Ending to the Tea

All the book club members brought enough packets of their favorite tea, cider, or hot chocolate to pass around for each member to take home and a few brought other goodies to share including a hand-knitted tea cozy from one of the talented members. 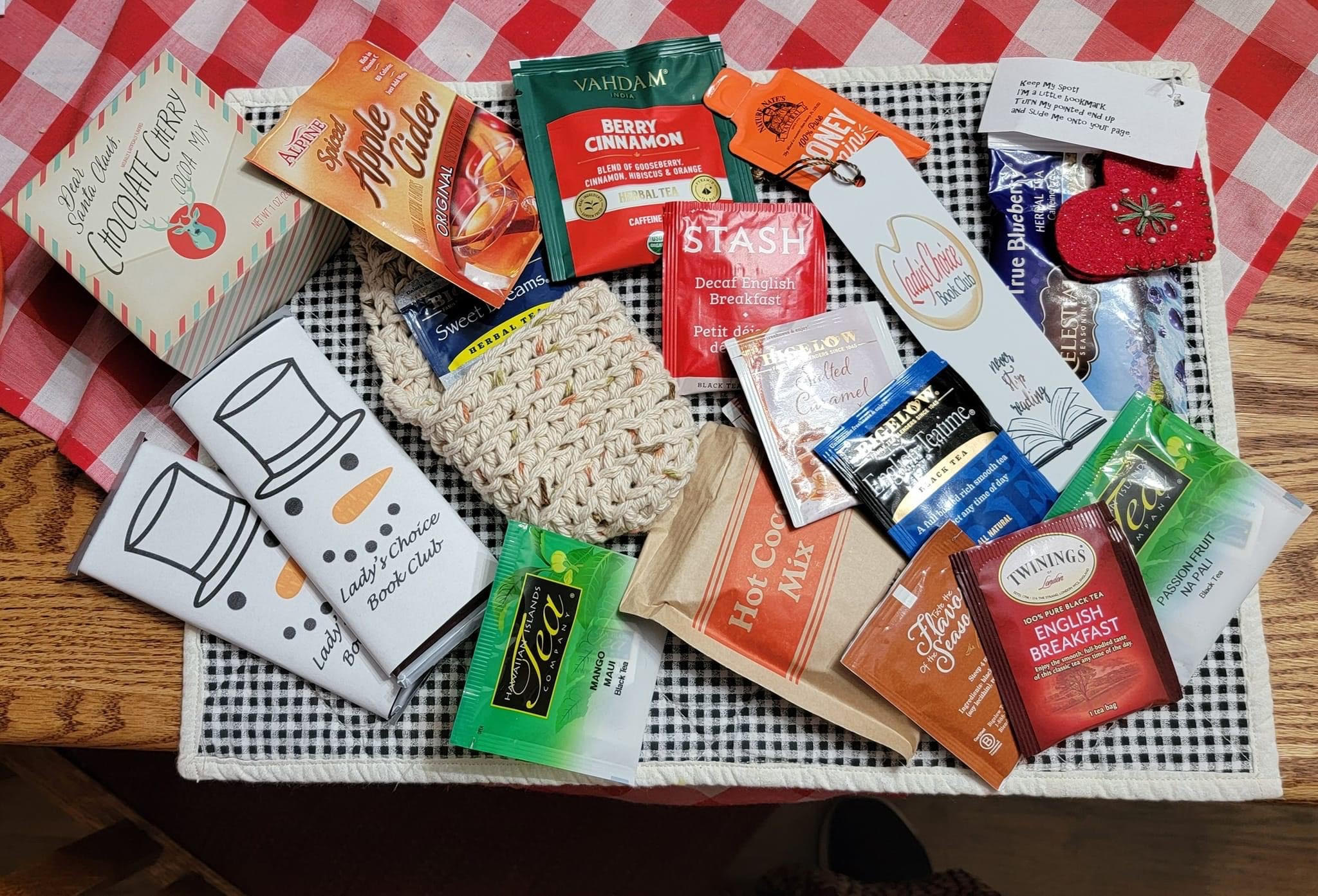 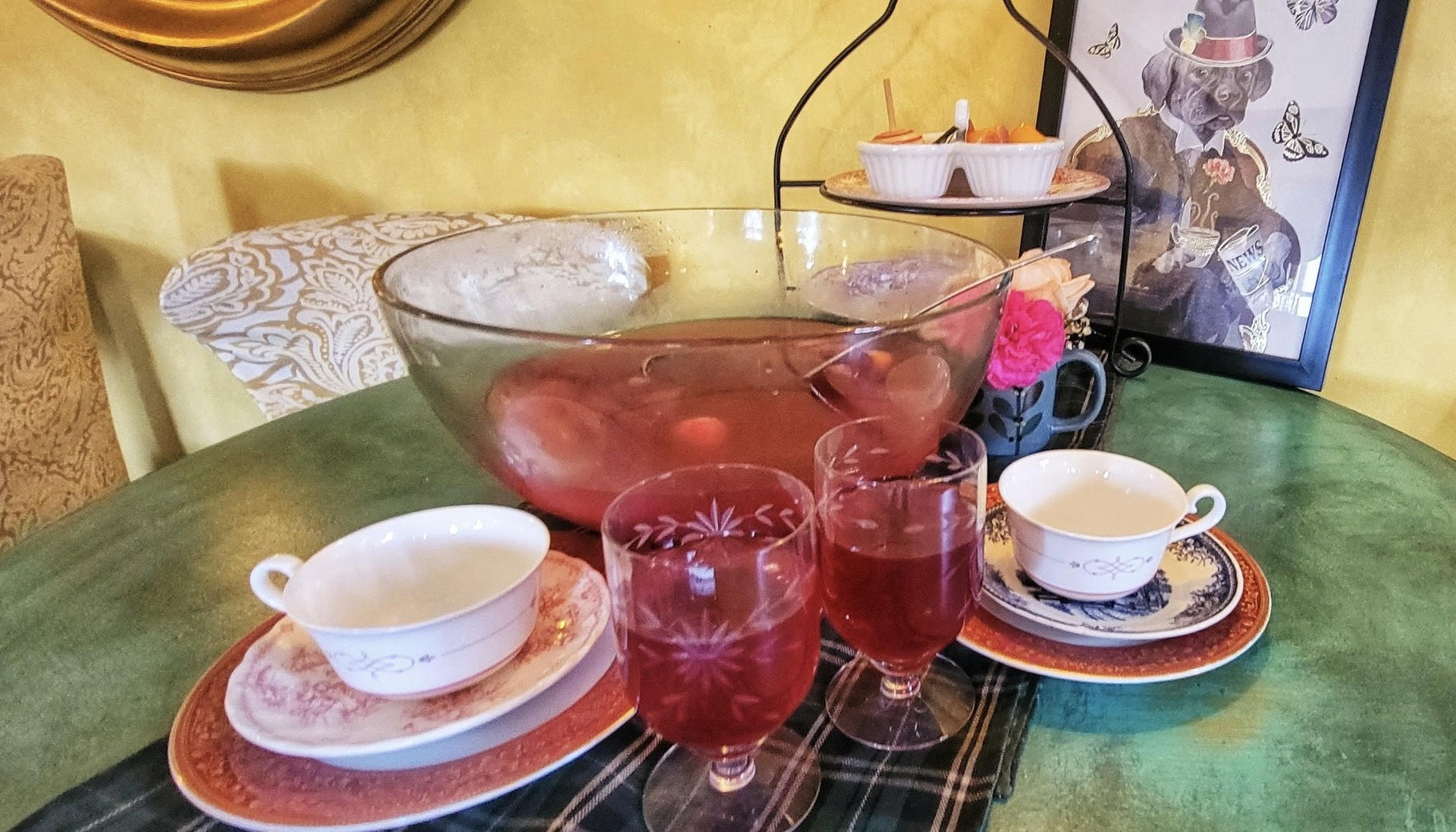 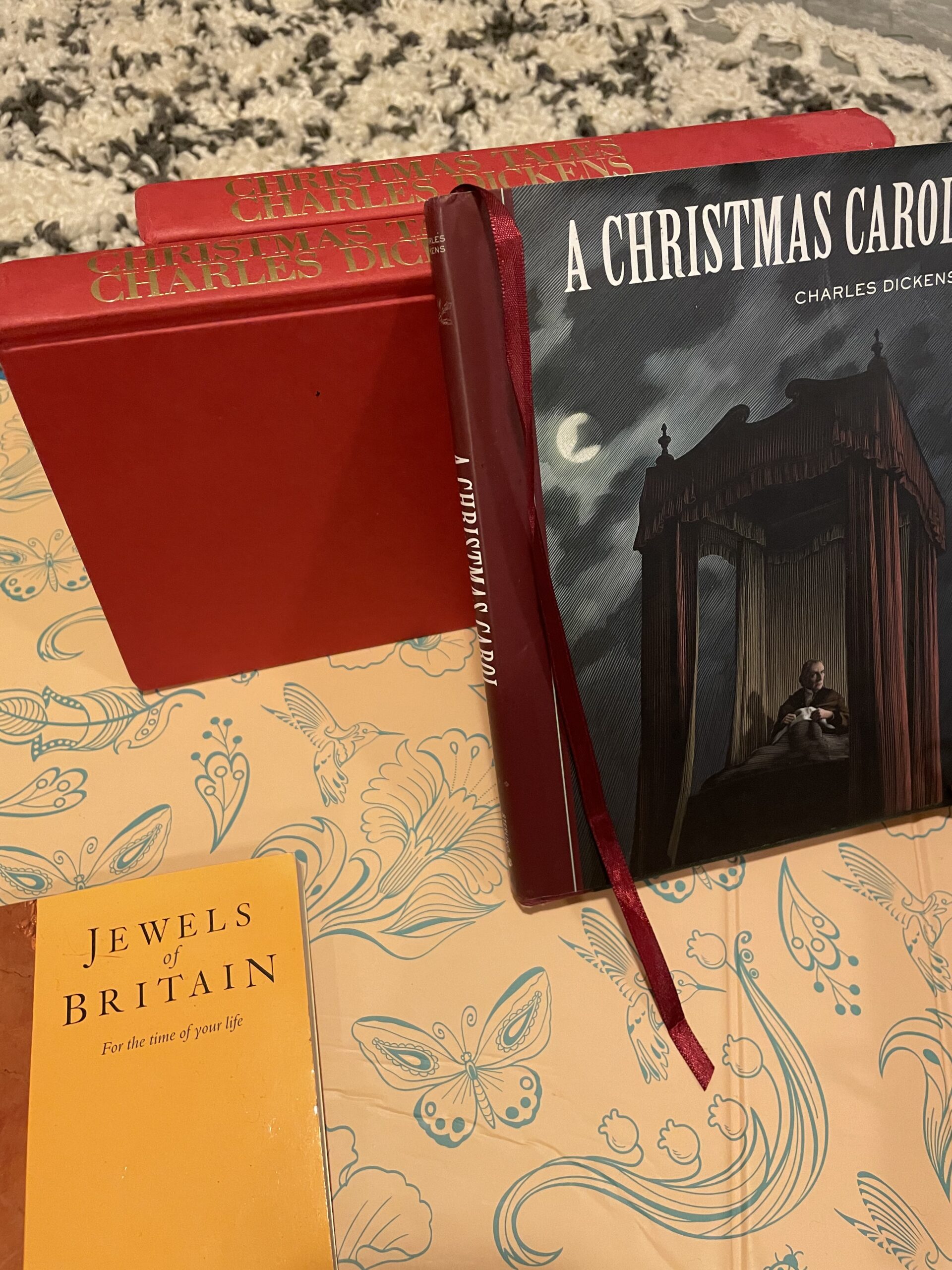 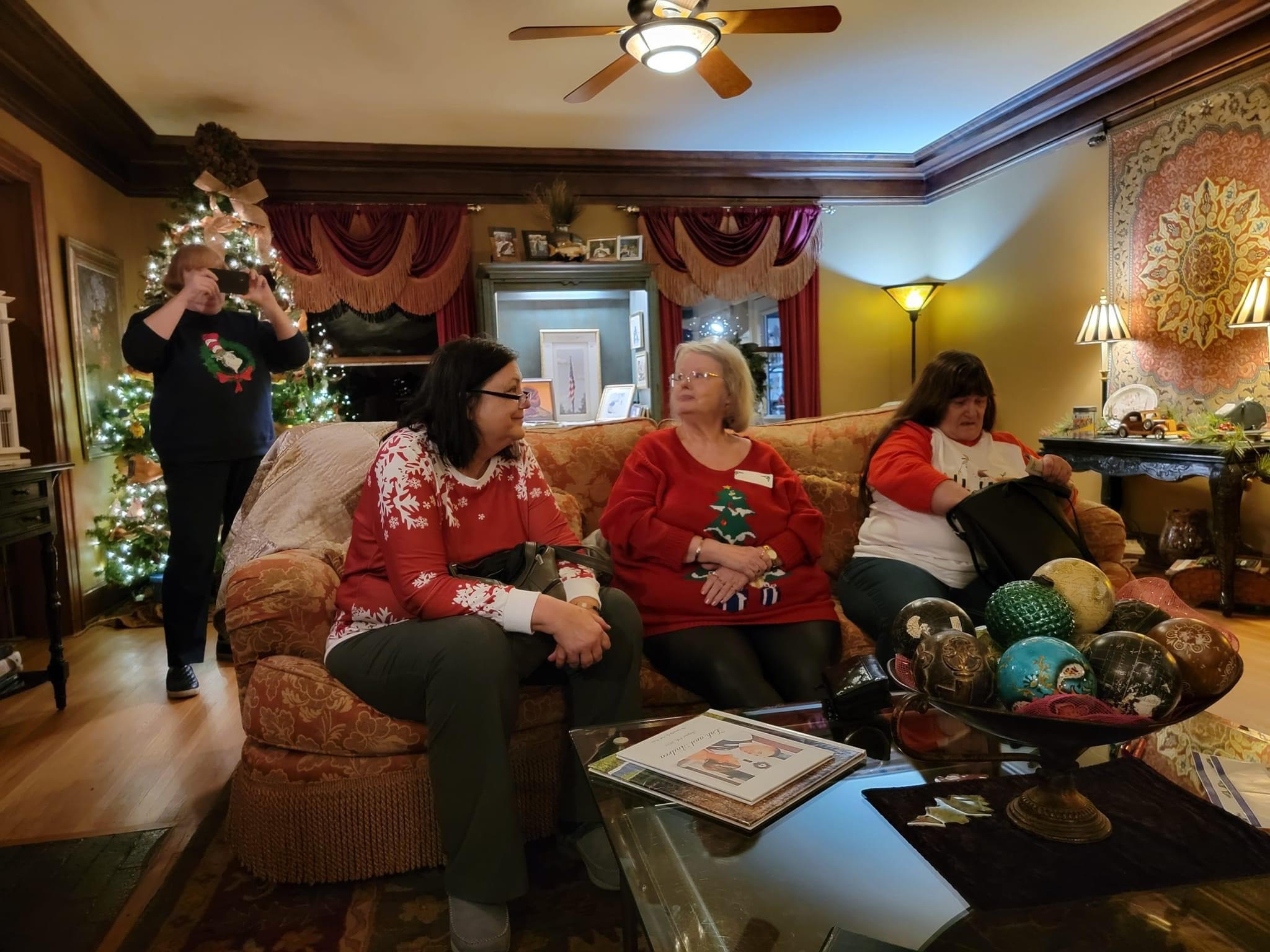 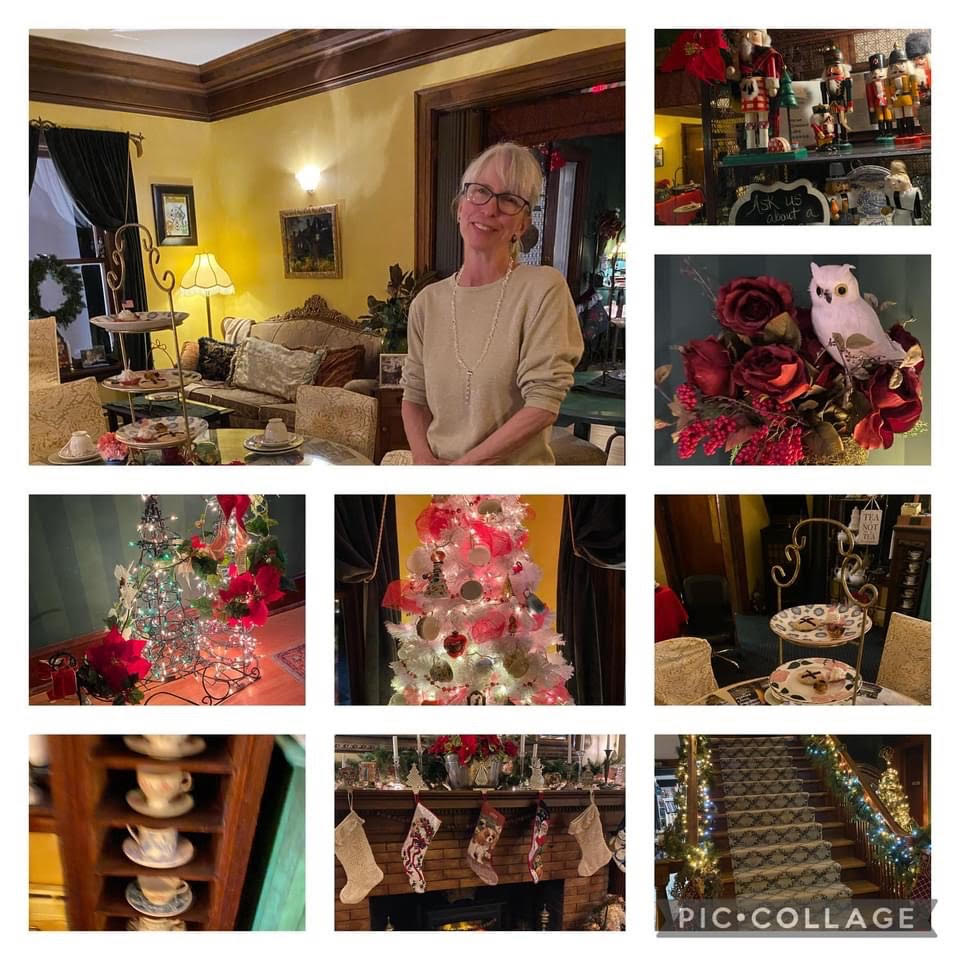